The next time your child asks, “Hey Mom! Can you make me a Super Mario Swimming Party Cake?” YOU WILL BE READY.

Say what you will about semi-homemade Sandra Lee, but to pull off a cake with this level of decorating complexity, I recommend using as many packaged and pre-made products as possible. Note the ingredients and you’ll see why.

First, I should mention that the inspiration for this cake comes from my bible, Women’s Day:Party Cakes, Cookies & Cupcakes, vol. XIII, no. 1, January, 2004.  Not sure this exact magazine is readily available, but you’ll probably find something similar near the tabloids in the checkout aisle. Don’t be distracted by anything Kardashian! Pick up a ladies’ mag special cake issue. You won’t be sorry; endless ideas await! Alternately, some recipes are available online. For instance, see the Ship Ahoy Cake, which explains how to create the cake-embedded Jell-o “water.”

Should have paid attention during JCC swim instruction so I could describe with actual pool terms.

For the Super Mario version shown here, I made two equally-sized, big rectangular sheet cakes (using vanilla mix from a box, because, really, most kids can’t taste the difference and I’d rather decorate than measure). I stacked the cake and used blue-dyed marshmallow fluff buttercream frosting between the layers. Then, I followed the Woman’s Day instructions for the blue Jell-o pool, being careful to first submerge several black licorice pieces to resemble capital-i-shaped swim lane markings on the bottom of the pool. Thin red licorice becomes the rope that stretches across lanes and mini marshmallows, cut in half, are the little buoys that float on the rope. At some point I frosted the rest of the cake, and used Chiclet tiles to outline the pool. 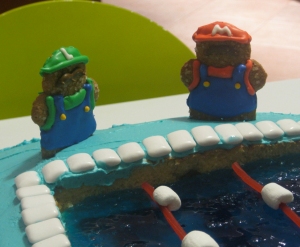 Mario not particularly photogenic, but very handsome in person. This is Luigi’s good side.

For Mario, Luigi, and those little power-up mushrooms, I whipped up a big batch of royal icing. Using gel food coloring, I dyed about 1/4 cup blue, and, using an pastry bag with a skinny tip, piped overalls onto the front of two Pepperidge Farms gingermen. When the little guys dried, I flipped them over and made the backs of their overalls with the same icing. I then mixed up a little red icing for Mario’s collar, sleeves, and hat, let him dry, did the back, let that dry, and then flipped it again to pipe the brim of the hat (piping onto previously-dried icing gave the brim some dimension). Did the same routine for Luigi using green icing. Piped on some buttons with a tablespoon or so of yellow icing. Next, using white (undyed) icing, I piped a generous dot between two small gumdrops to stick together each mushroom. When the mushrooms were stuck, I added small polka-dots of frosting on the caps. Then, mixed up some brown for Mario and Luigi’s mustaches and the mushroom’s eyes and piped ’em on.

Once all the characters were dry, I stuck them into the frosting to resemble some sort of swim race preamble.  I then randomly added Wilton star sprinkles to the cake’s sides, prioritizing the yellow ones, which apparently resemble something from the video game. And then probably passed out.